“Have you heard of Trail 44?” my coworker Jason asked me a while ago.

Jason pulled out his phone. “It looks epic,” he said while he scrolled through pictures his friend had posted of it on Facebook. The photos showed long rolling ridges punctuated by peaks covered in beargrass. A lone rider cruised comfortably through the frame. The Cabinet Mountains hovered in the distance.

“What do you know about it?” I asked him, salivating.

The next night at Eichardt’s Public House I saw Marty, a friend and mechanic who helped build my new mountain bike.

“Yeah, it’s fuckin’ rad. But you better be ready for an adventure.”

“Trail 44 rides the Idaho Montana border. The first 12 miles are killer ridge riding. You start at Canuck Pass and ride to Keno Mountain (google maps). That’s halfway. You can pedal down and shuttle back to your car there, but if you want to do the whole thing you keep riding to a 1500 foot hike-a-bike to the funnest descent around.”

“But the hike-a-bike is not just like walking your bike uphill. It’s like fuckin’-GRRRRAH [Marty squinted and mimicked pulling a 25 pound mountain bike up steep slick rock]!”

I consulted my maps and found the trail after Marty explained more thoroughly where it was. My friend Nate is always down for an adventure so I recruited him. Nate was hesitant but acquiesced. I checked in with Brian the owner of Greasy Fingers, the shop that built my new bike, and he confirmed to me that Trail 44 was one of the best rides around.

“But if you want to do the full-meal deal, you ride Canuck Pass to Keno Mountain and the continue on until the-”

“I talked to Marty about it the other night.”

“Who you gonna do it with?”

“Right on! Man, I’m jealous. It should be a beautiful weekend. Have fun.”

Nate and I start talking about it. He is not excited about epic-ing and driving separate cars an hour and a half for twelve or fifteen miles of riding. So, we cancelled. We decided to ride Bernard Peak outside of Coeur D’Alene instead, pedaling ten miles uphill for a seven mile downhill severed by so many downed trees we never really found our rhythm.

I consulted topographic maps and trail maps and figured out that if I was going to do a solo loop (instead of a shuttle) the ride would be somewhere in the neighborhood of 25 miles.

Bernard Peak was 18 miles and I came away from that feeling like I had ridden but not worked. I could do 25. Moreover, when it was all said and done there was 100 feet less climbing on this ride than on Bernard Peak.

Based on the numbers alone, I could do it.

That weekend was Oktoberfest. I bumped into Nate there. I told him I had done the math and that we could make a loop of Trail 44. After couple of minutes of deliberation, he said he was in.

Trail 44 rides through the heart of bear country, Grizzly or Black, so I was happy to have some company.

That night at Scarywood the ride was all I could talk about.

On our way home, I got a text from Nate.

When we got home I began to prepare my things to ride. Most importantly I packed a cooler for after the ride with a liter of fresh apple cider (made a couple of days prior with apples from our apple tree), a PB’n’J and a bottle of IPA.

I left as the sun was coming up. 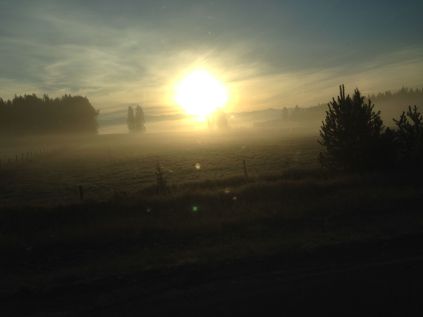 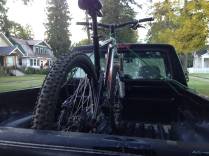 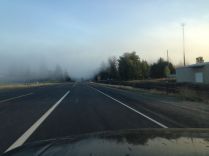 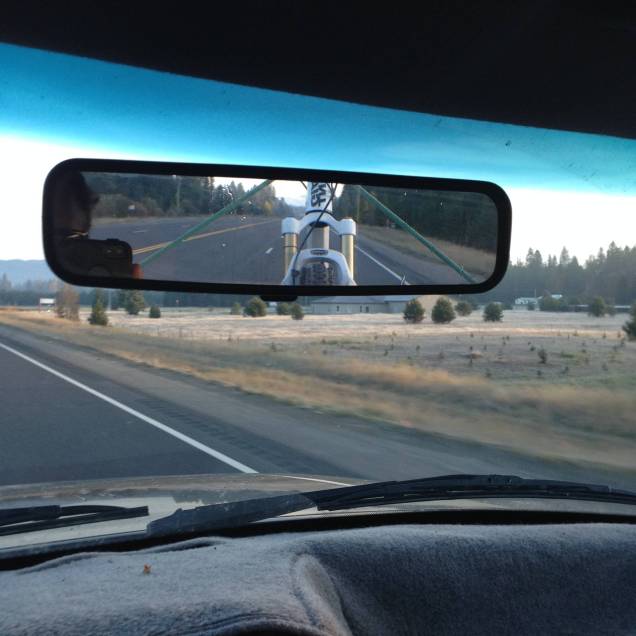 I got to where I planned to park without consequence, only getting lost once on the first turn off the highway. This was huge. It meant that I was right on schedule.

I parked. I changed. I started pedaling. 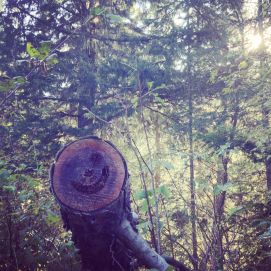 The uphill pedal to the trailhead was mellow. Yes, it was uphill on a road in the middle of nowhere, but that was part of the appeal. The most exciting part was hearing the crashing of large game in the woods about 25 feet off the trail.

This thing did not crash about like a ungulate but rather like something with paws and claws.

Throughout my pedal in the middle of nowhere I had been calling to the bears.

I redoubled my bear-songs and my pedal cadence and got out of there as fast as I could. Bear-spray be damned. I had no interest in encountering a bear.

The rest of the pedal was uneventful, except for the terror I felt. I was alone, practically in Montana with no defense against a bear other than pepper spray.

Could I even turn my bicycle around fast enough if I encountered a bear in front of me? What if the bear sprang out of the woods behind me? Surely I couldn’t pedal much faster than I was now, and a bear could probably catch me.

The conditions seemed ideal to encounter a bear. It was warm and sunny. There was snow melting all around me and little creeks and streams were running full force for early October.

I reached the trailhead an hour ahead of schedule; I was excited beyond belief. The view from Canuck Pass was breathtaking. Though the six inches of water pooled at the trailhead was unnerving. 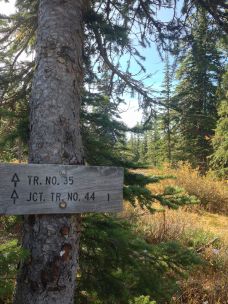 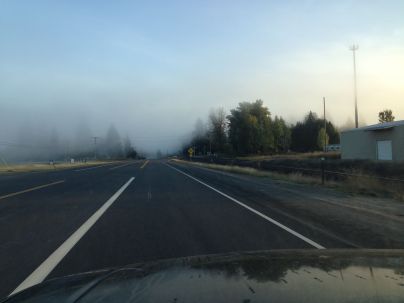 I cooled off and ate a snack. I started pedaling again.

First, the trail streamed water down to the pool I mentioned above. Second, I ran into snow.

Maybe, I thought to myself, the snow will abate. I have one mile to ride from here to the junction with Trail 44. If the snow continues, I will turn around. After all, I was at 5,800 feet and would be climbing to 6,100. 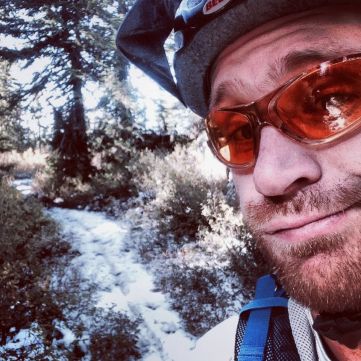 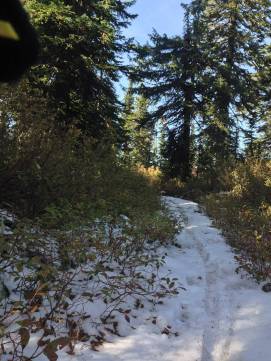 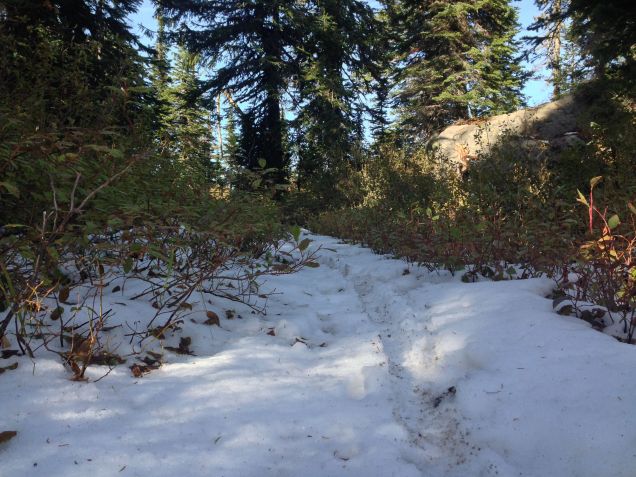 There were fresh-looking moose tracks on the trail. I turned around and headed back to the road. I put on all of my layers, knowing that the zip-down the road would be fast and cold.

Exerting little effort on the way down other than to brake, I was free to sing and hoop and holler. The wind rushed in my ears. The bumps in the pavement made my voice quiver funkily and funnily.

And so it occurred to me.

I pulled out my SpacePhone and began to record. I tucked it into a pocket on the shoulder strap of my backpack, the camera peeking out the top of the pocket. For the rest of the ride, I acted for the camera, ooh-ing and ahh-ing and sounding like the aliens from Toy Story while I zipped down the road. I probably hit 30 miles an hour on some of the straightaways.

I arrived at the car in record time. It was 10:30. I pulled out my camera, excited beyond belief to see the silliness I had just recorded.

Nevertheless, the sun was shining down on me. I stripped down, intending to get out of my bike shorts and pants and put my corduroys on. Instead, I stood there in my Crocs and only my Crocs, basking in the sun. Being in the middle of nowhere by oneself lends itself nicely to nudity.

I warmed myself while I ate a peanut butter and jelly sandwich and drank my apple cider and IPA.

Looking back on it, missions like this are doomed to fail once in a while and for a variety of reasons. Most importantly, I decided, so that I could go back to ride it another time and experience the trail firsthand in pristine conditions.

← Alaska: Part 4
Being a Professional →