It’s not an adventure if something doesn’t go wrong. 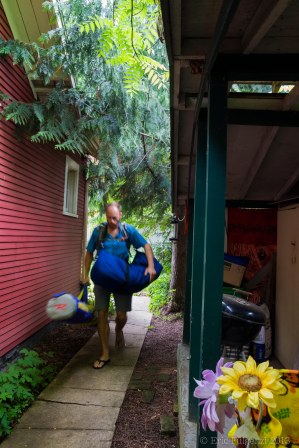 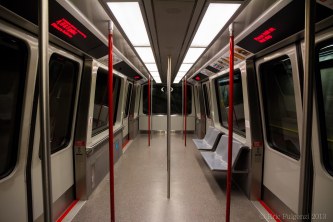 The empty tram in Seattle

The empty terminal in Seattle

I arrived to Anchorage last night. The flight chased the sun all the way here. Perpetually setting, the dying light of the day splashed mesmerizing colors on the clouds; it felt as though we were flying back in time. Tips of mountaintops, their snowy caps glowing, poked through the cloud floor like gems on a sandy beach.

When I arrived at the airport, though it was well past midnight, business carried on as usual. Hundreds of travelers in the terminal hustled and bustled about, buying trinkets and coffees, drinking shots and beers, entertaining wailing children, all of it.

My luggage, a 48 pound duffel bag and a skibag stuffed with skis and climbing gear, came quickly. I retrieved it, stepped out into the twilight, and hailed a cab. My cabbie looked Black, Chicago Black, but he spoke with a Middle-Eastern accent.

We loaded my unwieldy skibag, duffle, pack, and camera bag into the van and took off. Inside the airport there had been no cell phone service. Once we got outside, I was excitedly checking my messages.

“Your GPS von’t verk here!” The cabbie blurted out. “People always are thinking I take the too far or the wrong vay. But they do not know really, there may be one vay streets.”

“Oh, I was just checking my messages.”

Which was true, but then I got paranoid that he really might have been screwing with me.

“And besides,” he said after pause long enough for me to have stopped thinking about it, “Vhat do I vant whit an extra mile or two? Two, three dollars? Na.”

We got to where he thought the hostel was and asked me the address again. As it turned out, he’d taken a wrong turn.

“Bagh!” He slapped his meter off. He corrected the route and found the hostel in two minutes, easily.

“Vhatever you vant,” He looked off impatiently. “Like ten bucks.”

I handed him a twenty and he thanklessly made me change.

At the entrance to the hostel I punched in the door code (Russell had arranged all of this for me) and hauled my bags inside. Taped to the banister were after hours arrival instructions. I was to look for the note with my name on it, taped above the instructions placard I was reading. Two notes were taped there: one for Bobby and one for Weichuan. Russell had implied that I might have some logistical issues when I arrived. I asked the one guy who was up at 01:00 if he knew anything; he didn’t. Another guy came down the stairs and while navigating his way around my luggage I explained to him my situation. He said there were two empty beds in his room and that I could have one of them.

I washed my face, made a small clamor hauling my stuff into the room, and lay down, exhausted and completely excited.

I shuffled my luggage out into the yard to be as ready as possible. I grabbed the hostel banjo and sat ini the yard trying to play and keep an eye on it. The Yukon mosquitos were hungry for my fresh blood and I didn’t last very long.

Around 10:30, Russell walked in. We left immediately in search of food. We settled in at the Bear Tooth Theatre pub around 11:15, ordered a coffee, a pint, and a pizza.

We caught up and swapped climbing stories and drinking stories. I asked him about his his (recent) ex-girlfriend. He told me.

After brunch we geared up; grocery shopping at Fred Meyer, a few gear odds and ends at REI, a stop at his friend’s house who was outfitting us big time. 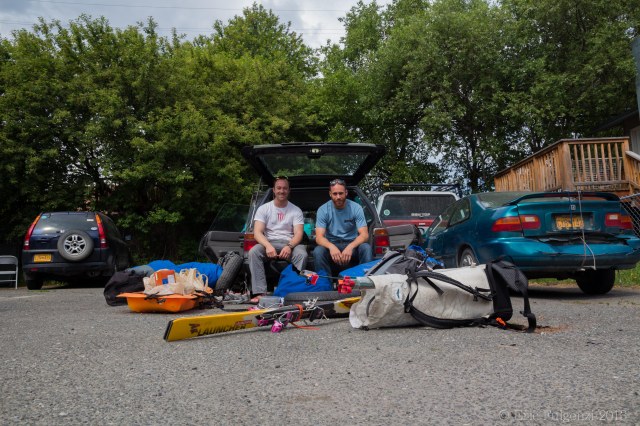 We were on the road about 16:00. In Wasilla we started to have to major brake issues. See, Russell’s car had some brake it issues. It could stop, mostly.

Pretty much just for this trip, Russell bought a 1992 black Subaru Loyale. He bought it from a former Italian supermodel named Anya who is the wife of a dogsled racer. It was in this vehicle that they used to haul dogs around in. The seat belts and various plastic parts inside of it were gnawed, sliced, and mangled. It stunk of dog sweat and slobber. The grille was totally mangled. The driver’s side headlamp was missing it’s lens cap (This was also the functioning headlight). There was no gas cap. The windshield wipers function but are missing. And the brakes didn’t work. Sort of.

Yet, do not be misled by my laundry list of shortcomings. It is a car. That holds all of our gear. In the days to come, this car will have saved us from hordes of mosquitos. The vehicle can do 65 mph, downhill.

And yet, as Boots Riley once rapped, “My car is better than your shoes.”

But the brakes. The brakes work. Sort of. Have you every rhythmically pumped the brakes when coming to a stop, just to mess with your friends? The brakes on the Black Beauty do this involuntarily.

Russell’s called his father, who is a mechanic, and checked with him about the brakes. His diagnosis? A warped rotor. Not self-correcting, but nothing to seriously worry about.

The only major issue was stopping from any speed. The car ca-chunked so violently when the brakes were applied that as our bodies flung forward the seat belts caught our weight and held us in place.

So, we were in Wasilla, braking repeatedly in 45 mile per hour traffic for highway stoplights. We made it through Wasilla and began to smell something acrid.

We pulled off onto a country road and examined the situation. The acrid smoke floated into the cabin of the vehicle. Russell spit on his finger and pressed it up against the wheel. The wet fingerprint rapidly evaporated. Russell waggled his hand from the heat. His plan? Get some water.

We drove a few hundred yards down the road and pulled into the first gas station we saw. It was closed. There was a burger stand about 500 yards away, across the parking lot.

“Everything in Alaska is really far from everything.”

When we got there the girl in the window kindly filled both of our water bottles. Back at the car, I started dumping water on the wheel from my bottle. Most of the water splashed onto the ground. Russell took a mouthful of water and spurted a stream from his lips directly onto the brakes.

After cooling the brakes as best we could, we headed up the road to the Napa Auto Parts the girl at the burger stand had told us about.

Napa had the lug nut and rotors that we needed. I got the brake caliper off and inspected it.

One of the lugnuts was a different size. We actually used that tool to remove it. Russell bought the proper one to replace it.

Apparently, we needed brake pads too. This Napa didn’t have them. But the Napa on the other side of Wasilla, back toward Anchorage, did.

We reassembled the brakes, mounted the Black Beauty, and rode the shoulder with our hazard lights flashing. After about ten miles we reached our oasis.

Napa supplied us with brake pads, a huge socket, and some WD40. Lo and behold, none of that helped us out. We could not remove the gigantic nut which held the wheel onto the axle. Which meant we could not remove the rotor. Moreover, the brakes had been so fucked for so long (worsened by our high speed braking over the last 24 hours) that the piston of the brake had driven itself far enough out that with the new brake pads, the housing couldn’t be replaced to its original position.

Oh, lest I forget: We pulled into the parking space and I commented to Russell that the space was not quite level. “It’ll be fine,” he said. He jumped out of the car and went inside to purchase the aforementioned tools and parts. Immediately, I went to work jacking up the car and tearing the brakes off. As I am levering the now stuck brake housing off of the rotor, I notice I slight shift in the vehicle. Before my very eyes (and luckily without any of my body parts underneath it) the whole car lurches backwards and falls off of the jack! The rotor seated itself in about one inch of hot asphalt; temperatures were approaching 95˚ F. Quickly, I chocked the wheels with stones from the side of the building and jacked the car back up. Oops.

Over the next hour, the final of three, we deliberated about how to proceed. Russell found a spotty internet connection by which he could call his dad (Have I mentioned at this point that neither of our call phones had any service?). Russell’s father’s prognosis was that we could mostly safely make our way to Talkeetna. Once there we should find a mechanic and have the brakes professionally repaired.

Minds made up, we once again reassembled the wheel and took off for Talkeetna, hoping and praying that neither moose nor bear ran out in front of our car (both very distinct possibilities in the taiga and bush of Alaska). Or that there was any traffic whatsoever for that matter.

Around 11:00 we pulled into the Talkeetna Hostel, a small home with all kinds of yard-shit strewn about the place and seven or eight cars parked in front of it. The kind woman who runs the place answered the door and informed us that she had one VW van available for rent for $35 per night or we could camp for $10 each. Being the dirtbags we are, camping was the most appropriate option.

“Besides, the vans are hotter than shit and stink like mold,” Russell informed me on the way back to the car.

We set up camp, drank an American Pale Ale on ice, let loved ones know we were safe via email, and passed out.

Next: The Ruth Gorge Adventure