Yesterday was my last day in Costa Rica. If you don’t feel like reading this whole post, skip to the last four paragraphs. Seriously.

Typically I woke with the sunrise. Atypically, I got up. I dressed in my running shorts and tank top and went downstairs to begin my exercises.

Last year, I celebrated Thanksgiving in Atlanta. The holiday was spent marvelously with my grandmother, who with her last living energies, insisted upon making the journey there to celebrate with my family; she passed away only days after returning to Chicago. My friend and former roommate Russell, who moved in with me and my other roommate during my final months in Bend, Oregon happened to be finishing a paramedic residency at Grady Memorial Hospital in downtown Atlanta.

Russell responded to a Craigslist Ad. My other roommate John screened everyone first and told me that he thought Russell was the one. We became friends almost instantly; Russell, compassionate, insightful, and crazier than I, moved in just as I was beginning the recovery process of a difficult breakup. Wisely, he listened to me, accepted the tears that sprang forth from my eyes when I indulged in my pain, and drank beers with me when he really should have been studying. Twice, when we lived together, he took solo trips into the Oregon wilderness; once on skis, the other on bicycle and packraft. With the exception of six months in Bend and two in Atlanta, Russell has spent the last number of years in Alaska. Even while he lived in Bend, he managed to get back to the Last Frontier. Russell and a friend pulled off a wildly audacious packrafting trip across many, many miles of unspoiled wilderness far beyond the reaches of my experience.

Over Thanksgiving dinner, and after many glasses of red wine, Russell turned to me and said, “Dude. We should climb the Eye Tooth.”

With little hesitation, I replied, “Okay. What is it?”

Later that night after we returned to my sister’s house, he showed me some photos of the Ruth Gorge and the line that the route follows up the impressive 2300’ face. He sent me a digital copy of the Alaska SuperTopo guidebook before I left Atlanta to fly back to Idaho. On the plane ride home I drooled over the photos and the climb. Already I was figuring out which pitches we could simul-climb in order to shave minutes off the 23 projected hours for the climb.

Days later I was bombarding him with emails about what kind of gear I needed to buy and whether or not he could get time time off of work.

Currently, I have June 6-22 free to fly to Alaska and climb the shit out of that mountain and others in the area. As such, I have been training since January for the climb. Though lately I haven’t been as dedicated as I was when I started.

Before I left for Costa Rica I had been spending somewhere in the neighborhood of twelve hours per week at the fitness center and three to four at the bouldering gym. I was super fit. I ran into a friend on a trail by the lake while walking my dog and he told me about a 25K trail race in Spokane. I figured, what the hell?

Throughout my entire time in Costa Rica, I might have run ten times. We play lots of soccer which wound up being my downfall. On two separate occasions, I twisted my ankle and was unable to run for three weeks in total.

So, though I put on my running shorts, my ankle was sore enough that I thought it most prudent to simply do my exercises.

While I worked out, I listened the audio recording of Eat Pray Love. I’ve seen the movie twice and enjoyed it immensely. Kim often has her students read the book throughout their recovery process. Somewhere therein, she lost the book, and so I got an audio copy from the library and have been listening to it throughout the trip. I’m nearly done. Most times I listen to it, I become engrossed in it. This time was no exception.

Bathed in early morning light with a cool breeze and a chorus of howler monkeys, toucans, crickets, and the full cacophony of jungle sounds, I spent two hours strengthening my body.

Eventually, the new staff, Amy, awoke and left her bedroom. Woody greeted her with squeaks and brays. She quietly said hello and shortly thereafter we awoke the boys.

Not quite finished with my workout, the school day began. It was the first full day that Amy and the new students were in Costa Rica. After a short introduction group the boys got down to school. Amy and I compared notes, got setup as best we could.

Hortencia came, like she does every Tuesday, and prepared us a delicious Arroz con Pollo. Just before lunch I finished my workout and showered. For lunch I ate two platefuls of Arroz con Pollo, frijoles, ensalada, y platanos verdes. I washed it all down with fresh-made Fresco de Piña.

Amy and I decided that rather than work in the afternoon as we usually do, it would be a great treat for the boys if we went to the rope swing outside of La Fortuna.

We spent two hours at the rope swing. Everybody was done swimming and standing on the rocks taking photos and watching me flip, and swim, and swing. Finally, I realized they were done swimming. I took one last mammoth swing, executed a perfect backflip and climbed up the rocks to the highest point. There, I stood with my heels hanging off the rock. With one push, I flew backwards, spinning and flipping through the air.

We drove home tired and happy, the new group totally stoked on the swimming hole and on Costa Rica.

There were nine of us in total, so we had driven two cars. I arrived home ahead of Amy. Shortly after we got there, Amy and another student came walking up the hill.

I thought to myself, dear lord, did the car break down?

Well, sort of. Amy told me that she stalled out on a steep section in the road (It had been a while since she had driven a manual vehicle). When she tried to get the car going again, she couldn’t because of the incline, and so she tried to back up. That is when things went awry. 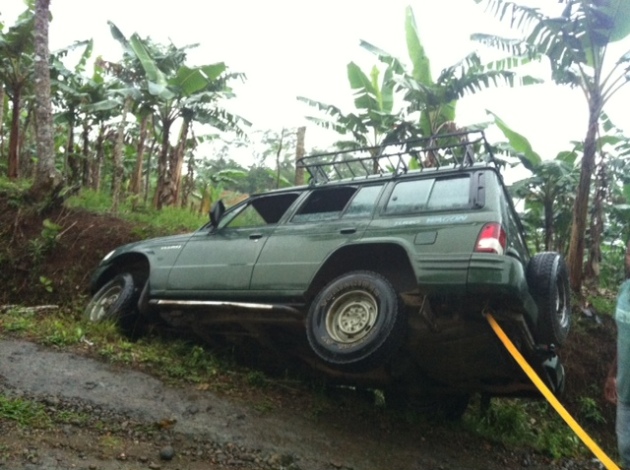 Worse even, the driver’s window shattered when she climbed out of the vehicle. The door slammed shut because of the angle at which the car had come to rest. Apparently the whole thing happened more or less in slow motion, and luckily no one was hurt.

Freddy brought the last student up to the house to clean up while Hugo and I waited for the insurance guy to arrive.

“Lastima que no tenemos unas amarillas para la esperanza. / It’s too bad we don’t have a couple of beers for while we wait,” Hugo remarked.

Just then, it started to rain.

“Vamos donde Olla para no estar aqui todo mojado. / Let’s go down to Olla’s so we don’t stand here getting all wet.”

When we got down to Olla’s, we stood under the eave of his lumber mill watching the rain. Hugo said, “Let’s go see if the old man’s got any beers, eh?”

Sho’nuff, Olla cheerfully gave us his last two beers for the wait. The insurance company called Hugo back and told him he could take the photos himself and to just go ahead and bring the car home.

“Por que no vienes abajo a mirar mi partido y tomar unas amarillas? / Why don’t you come down tonight to watch my game and drink some beers?”

So, we went home and I called Kim. We talked business, and oozed I love yous and I miss yous across Skype. I ate quickly while I fixed numbers for a meeting we have with some clients tomorrow, and I blasted down to La Tigra to catch the end of the game.

It was a spouse’s league where husbands and wives play soccer together and against one another. I drank a beer while I watched the play. They finished the game, Hugo showered up and we went into the only bar in La Tigra that is open past ten P.M. (There are only two bars in the town period). We had a beer there, and then drank el zarpe at the edge of the soccer field under perfect skies, exchanging stories about life.

I drove us home and wished Hugo a goodnight. When I arrived home, I packed my things and went happily to sleep.

This day merits description for one simple reason. It was one of the best days I have had in ages. Nothing extraordinary happened (except of course going to the rope swing).

I worked. I exercised. I drank some beers. I hung out with friends. I towed a car out of a ditch. I ate a delicious home-cooked meal. I laughed. I spoke Spanish. I might have even played the guitar. I listened to some great music. I heard wisdom imparted through travel in Eat Pray Love.

While I sat on the hood of the car watching the last few minutes of the game and sipping an ice cold Imperial all of these things struck me. Tears came to my eyes. I allowed them to trickle down my cheeks.

A kiss from my one true love notwithstanding (and some snuggle-time with my dog), it had been a perfect day. And I was so overwhelmed with its perfection that I surrendered to the bliss of that feeling without hesitation or ego.